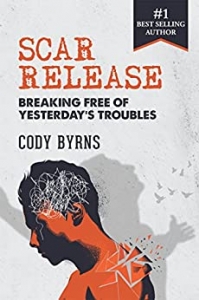 Traumatic experiences occur on a daily basis in our world. They can leave either physical or emotional scars. Scars are permanent, and these marks have the potential to affect our lives in many ways. Recovery occurs in our minds, and not having the right mindset can prevent us from moving forward.

In his new book, “Scar Release,” Cody Byrns shares his story of the horrific car crash in May 2013 that left him with third- and fourth-degree burns over much of his body. These scars left him devastated, both physically and emotionally. Despite his gratitude for having survived the crash, Cody initially struggled to deal with the effects of the crash. He pulled through, and now works through those challenges on a continuing, daily basis in a positive, life-affirming way.

Cody shares with Dr. Joey how he was able to shift his mindset, as well as the role his personal faith played in that progress. Cody also dives deeper into a study of scars and understanding the importance of not allowing those scars to prevent us from achieving a life of freedom and abundance.

Dr. Joey Faucette is the author of two #1 best-sellers, Faith Positive in a Negative World (with Mike Van Vranken) and Work Positive in a Negative World (Entrepreneur Press). He has written seven books with his latest contribution being to The Unofficial Guide to Fatherhood with eight other authors. He is the founder of Listen to Life, Too, a company that coaches people to redefine their reality and fulfill their dreams. His coaching programs include 7 Weeks to Faith Positive, the Faith Positive Mentor Coaching Program, 7 Weeks to Work Positive, and the Work Positive Mentor Coaching Program which are available from www.GetPositive.Today. He hosts the popular podcast, Faith Positive Radio as well as the daily podcast, Live Positive. His blogs are read in over 50 countries. Dr. Joey has appeared as a guest on hundreds of radio and TV shows across North America in most major markets. He has written over 1,000 articles that have appeared on Wall Street Journal Money Watch, CNBC, Dallas Morning News, Sacramento Bee, Entrepreneur.com, Yahoo Finance, and countless other websites. He and his wife have two adult daughters and enjoy living on Pleasant Gap Farm with their beagle Georgia, two quarter horses, and two cats—Boo Radley and Atticus Finch.
Tweets by drjoey